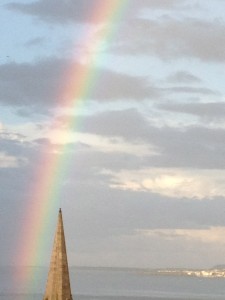 As we all know was William Shakespeare an English poet. He is widely regarded as the one greatest writer in the english language. The english national poet, we know also very well as the „Bard of Avon“.
He wrote two narrative poems, 38 plays and 154 sonnets. His plays are performed much more often than those of any other playwirter in the world. They have been translated into every major living language. Moreover he wrote a few verses, but the autorship of some is uncertain.

In this small article I want to present only three of his 154 sonnets.
The most famous sonnet is the Sonnet 132, as we know. So let me start with No 132, this time.

Thine eyes I love, and they, as pitying me,
Knowing thy heart torment me with disdain,
Have put on black, and loving mourners be,
Looking with pretty ruth upon my pain;
And truly, not the morning sun of heav’n
Better becomes the gray cheeks of the east,
Nor that full star that ushers in the ev’n
Doth half that glory to the sober west,
As those two mourning eyes become thy face.
O let it then as well beseem thy heart
To mourn for me, since mourning doth thee grace,
And suit thy pity like in every part.
Then will I swear beauty herself is black,
And all they foul that thy complexion lack.

In faith, I do not love thee with mine eyes,
For they in thee a thousand errors note;
But ’tis my heart that loves what they despise,
Who in despite of view is pleased to dote.
Nor are mine ears with thy tongue’s tune delighted,
Nor tender feeling to base touches prone,
Nor taste, nor smell, desire to be invited
To any sensual feast with thee alone.
But my five wits, nor my five senses, can
Dissuade one foolish heart from serving thee,
Who leaves unswayed the likeness of a man,
Thy proud heart’s slave and vassal wretch to be.
Only my plague thus far I count my gain,
That she that makes me sin awards me pain.

Two loves I have, of comfort and despair,
Which, like two spirits, do suggest me still;
The better angel is a man right fair,
The worser spirit a woman colored ill.
To win me soon to hell, my female evil
Tempteth my better angel from my side,
And would corrupt my saint to be a devil,
Wooing his purity with her foul pride.
And whether that my angel be turned fiend
Suspect I may, but not directly tell;
But being both from me both to each friend,
I guess one angel in another’s hell.
Yet this shall I ne’er know, but live in doubt,
Till my bad angel fire my good one out.

Isn`t it a real challenge to read again these sonnets. For me it is almost like a trance sometimes.